The IHTSDO has a preference to define concepts by Closest proximal primitive (CPP) parent(s). I’m yet to be convinced of the benefit of this approach, and prefer stating any obvious parent (regardless of their definition status) along with a set of defining attributes that are independent of whatever parents are chosen. Upon classification some change in parents might be expected, however the defining attributes should be pretty static. This isn’t always the case, and when it happens provides an opportunity to assess and address quality issues within the terminology.

The stated relationships seem reasonable enough. But then have a look at the classified state of this same concept: 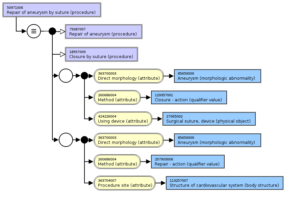 The introduction of a second role group seems unnecessary, a Closure is a type of Repair. The main difference is the introduction of the Procedure Site = Structure of cardiovascular system attribute, inherited from the parent concept

This raises the issue:

If a CPP modelling approach was adopted here (it wasn’t) and the upper level Procedure (procedure) was chosen as the parent. The Repair of aneurysm by suture would not not classify as a type of Repair of aneurysm.

Obviously not correct. So,

Either way, by NOT employing the CPP approach here, has revealed an opportunity to improve the terminology. And if it were adopted, a significant lineage would be missing.