It’s likely you’ve worked this out for yourself already, but if not read on.

Towards the end of 2012 LinkedIn introduced “Endorsements”. Even if you’re not an active user, if your at least on the social network you’re likely have gotten at least an email or two notifying you that some connection has ‘endorsed’ you for some skill. At first it might seem like a good idea, and it probably is, but the end result is really of little value.

I generally only reach out to connections on LinkedIn if I actually know them. That is, I’ve worked with them or spoken to them at a meeting or via social media. However I do accept requests from strangers if they’re in the a relevant industry or if they there’s some professional value. I don’t expect this pattern is particularly odd, and I’m sure some users may be more libertine with there connections and others less so. Anyway, I’m just setting the scene for my network.

So here’s what my current endorsements sections looks like. 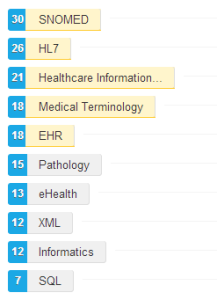 Now for the industry I’m currently working in, and work that I currently do these skills are pretty accurate reflection of what I’m ‘selling’. And the majority of my network are contacts of made through the health informatics space, so it makes sense these are my most endorsed skills (compared to my laboratory/pathology stuff). But it is particularly with these skills where a problem has become particularly evident to me.

At least if somebody endorses a vague skill like ‘informatics’ they could probably assume I must at least know something from some interaction we’ve had. But what value is there in somebody from IT Support (from my office job) endorsing me for Blood banking. It’s been at least 10 years since I’ve done a cross-match, and it was never a core part of my job. But I’m confident that all but one or two folk in my LinkedIn network have not required me to perform one. But I guess they know me, consider me a good bloke, and figure I wouldn’t list a skill I didn’t have. So I suppose it’s OK.

This week I received an email saying I’d been endorsed for “SNOMED” “Pathology” and “Health Information Exchange”. One of the endorsers I don’t even recognise their name, so I assume they were a connection I accepted while I was feeling particularly friendly. But again, I think this really makes the idea of ‘skills’ and ‘endorsements’ a pretty shallow concept. I’m not saying it’s users fault. At least 28 people like clicking stuff. But at the moment, it’s really just a bit of fun and posturing. If LinkedIn wanted this to be something truelly meaningful, perhaps they should require you to associated skills with jobs you’ve had, and only colleagues from those jobs can endorse you?

And in case you didn’t know, you can endorse your connections for skills they don’t even have on their profile!

Though the recipient does need to manually accept these before they appear on their profile. Which is a good thing!

Edit: I’ve since found out some of my connections have actually seen this on my profile, so perhaps they don’t get moderated…